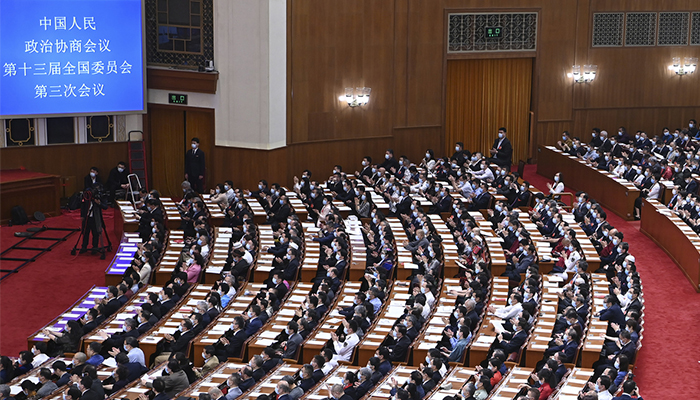 China is capable of reaching its goal of building a moderately prosperous society in all respects by next year with support from macroeconomic policies, despite troubles caused by the COVID-19 pandemic, political advisers said.

The country has sufficient policy tools to tackle economic challenges amid the pandemic, and the fiscal and financial system is generally stable, Yang Weimin, a member of the 13th National Committee of the Chinese People's Political Consultative Conference, said in a speech on Sunday.

Both fiscal and monetary policies have "sufficient ammunition" to support economic growth, said Yang, former deputy head of the Office of the Central Leading Group on Financial and Economic Affairs.

Liu Wei, president of Renmin University of China and a member of the central bank's monetary policy committee, said China's potential GDP growth rate is estimated to be 3 percent this year.

Also a member of the 13th National Committee of the CPPCC, Liu said strong expansionary policies to stimulate aggregate demand and measures to promote supply-side structural reforms were likely to drive up GDP growth to around 5 percent. But China "will pay a high price" for employing such policies and measures, he warned at a CPPCC meeting on Saturday.

Instead of setting a specific GDP growth target, this year's Government Work Report made safeguarding employment and people's livelihoods priorities, considering the impact of the pandemic.

The government is aiming for a surveyed urban unemployment rate of around 6 percent this year and is seeking to create more than 9 million jobs in urban areas. These targets may require a GDP growth rate higher than 4 percent, Liu said.

China has launched many measuresŻŁsuch as raising the debt-to-GDP ratio, extending government debt, increasing liquidity and lowering financing costsŻŁto offset the impact of the pandemic.

"As long as these policies are in place, China will take the lead in achieving economic stability and recovery," Yang said. "The epidemic has brought many changes, but it cannot change the fundamentals and momentum of China's long-term economic growth."

Economists believe China's sustainable economic growth will mainly rely on huge domestic demand, but the country will not abandon the international market. The urbanization process will continue to create a new driving force for the economy.

"Markets are the most scarce resources for economic growth in modern society. Any rational investor will not give up on the large and growing Chinese market," said Yang, who also stressed the importance of deepening reform and opening-up.

In the face of increasing downward pressure on the economy this year, China did not adopt the "flood irrigation" approach to monetary easing. Policymakers concentrated on ensuring stability of employment, the financial sector, foreign trade, domestic and foreign investment and expectations.

"The fact that there is no growth target this year does not mean China's leaders have stopped caring about growth," said Louis Kuijs, head of Asia Economics at Oxford Economics, a British think tank.

"While the details have yet to be seen, based on earlier information, some of the components of the plan will be along the lines of expanding mixed-ownership reform and cutting overcapacity in sectors including coal and electricity, steel and nonferrous metals," Kuijs said.